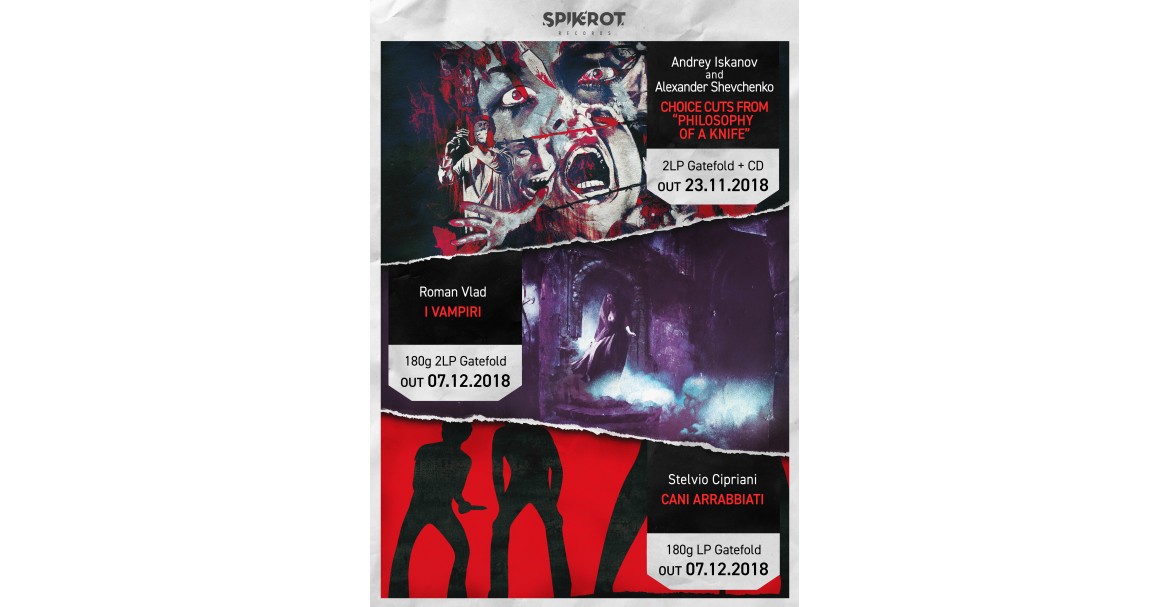 Yes, you read it right!
Since the first meetings of our soon-to-be label it was a shared opinion that we didn’t want to focus just on metal. Our music tastes are so randomly varied that makes it impossible to confine ourselves in just one, even though awesome, music genre, so the idea of  joining  the soundtracks business grew day after day.
Until today, the day in which we can finally share with you the first three Spikerot’s soundtrack releases, after months of hard work and dedication.

As our motto says, we always want to do something “unconventional” and the first soundtrack release fits our intentions perfectly.

“PHILOSOPHY OF A KNIFE” (2008) is one of the most extreme, shocking and disturbing movies of all time.
From Russian director Andrey Iskanov, POAK is a 4-hour-long journey to hell and back, showing with incredible details and cruel realism the experiments performed by the Japanese Unit 731 on the Chinese population during WW2. A real punch in the gut.

Can you imagine a soundtrack for such a movie? Iskanov himself and composer Alexander Shevchenko delivered a score in which the most wicked industrial music meets flickering piano ballads and beautifully distressing soundscapes. You’ll have a taste of this very soon.
Pre-orders for CHOICE CUTS FROM “PHILOSOPHY OF A KNIFE” will start OCTOBER 8 at 19:00 CEST.

The next two installments in our Soundtrack journey will be a sincere homage to our native land: Italy.

We are very proud to bring you for the first time in ITS ENTIRETY and for the FIRST TIME ON VINYL, Re-Mastered from the original master tapes, the Soundtrack from the very FIRST ITALIAN HORROR MOVIE of the sound era.
Riccardo Freda’s ”I VAMPIRI” (aka “The Vampires” / “Lust of the Vampires” / “The Devil’s Commandments”, 1957) is the forefather of a genre that in the following decades will bring Italian directors such as Bava, Argento and Fulci to become among the most influential horror filmmakers of all time.
The Soundtrack, composed by Maestro ROMAN VLAD fits perfectly with the flick’s atmosphere and will guide you through the streets of a dark and gothic Paris.
Fun Fact: Mario Bava stepped in as director in this movie, replacing Freda and starting his glorious career.

The last soundtrack announcement for 2018 is a gem by the great, late Mario Bava, one of Italy’s finest filmmakers, who had a big influence on many colleagues like Quentin Tarantino, Joe Dante, John Landis and many others.
“CANI ARRABBIATI” (aka “Rabid Dogs”, 1974) has remained unseen for over two decades due to the production company’s bankrupt and once released in the 90s immediately became a cult flick among movie lovers.
“CANI ARRABBIATI”, composed by Maestro STELVIO CIPRIANI, has been re-mastered from the original master tapes specifically for this release and will be available FOR THE FIRST TIME ON VINYL IN ITS ENTIRETY.

** Few hours ahead of this announcement we heard from the media about the passing of Maestro Stelvio Cipriani and while we’d like to send our condolences to his beloved ones, we feel honoured to release one of his most recognizable works and we hope to do justice to his unbelievable musical legacy.**

Not a bad way to end our first year as a label.
We hope you will enjoy these first 3 soundtrack-related releases as we’ve got more to come in 2019 and beyond.